Dmitri Shostakovich. Symphonies No. 1 & No. 2 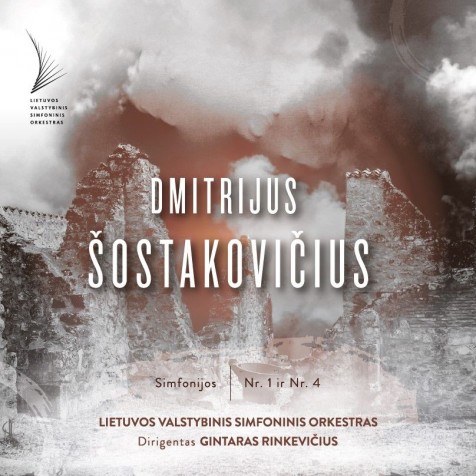 Dmitri Shostakovich (born on 12 (25) September 1906 in St. Petersburg, died on 9 August 1975 in Moscow) – Russian (Soviet) composer, pianist, pedagogue, cultural figure. Awarded the highest prizes of the USSR, honorary titles. Honorary member of many art institutions of the world, honorary doctor. His multifaceted work of various genres is among the classics of the 20th century. Symphonies, concerts, quartets, chamber ensembles, operas, songs, and works for piano forever remain in the golden fund of world music.

His symphonic works are especially important. The 15 symphonies express deep philosophical concepts, complex experiences of the human spirit, sharp tragic conflicts between the personality and its environment. D. Shostakovich has created his own unique style and is easily recognizable in such "company" as Béla Bartók, Paul Hindemith, Olivier Messiaen, Ottorino Respighi, Igor Stravinsky. The most important features of that style: unexpected contrasts, dynamic development of music, polyphonic texture, unique melody, subtle lyrics, humour, grotesque and irony. Repeatedly brutally and wrongly criticized, accused of formalism, D. Shostakovich remained honest, and therefore was a tragic creator in his country.

D. Shostakovich wrote directly in the symphonic score, so his orchestra pulsates like a living, complex organism. It is impossible to imitate D. Shostakovich's orchestration – it would mean writing like him.

Symphony no. 1 (in F minor, Op. 10, 1925, premiered on 12 May 1926 in Leningrad) immediately brought world-fame to the 19-year-old creator. Already in 1927 it was performed in Berlin and later in Philadelphia and New York. As soon as he graduated from the conservatory, this young man entered the immortal history of music. The symphony was composed intermittently, while he was earning his living in movie theatres. This resulted in an even more impressive final outcome. In 1926, the premiere of the symphony became the most significant "adventure" of Leningrad. According to one witness, “it was gratifying that this music, unknown to anyone, from the very beginning turned out to be both surprising and beautiful. Each beat revealed a musician with rare thinking, talent, personality, style, way of expression... The applause was long and friendly. Somehow, everyone realized they were participating in a unique event”. After the concert, conductor Nicolai Malko said: “I feel like I have opened a new page in the history of symphonic music”.

Already the first part stuns with short original introduction, where the trumpet, clarinet and bassoon "sarcastically" participate in a shout out. The music plays with thematic, rhythmic aspects, variety of instrumentation, irony and grotesque. On the other hand, a real genre "carousel" spins here: waltz, march, jazz "inclusions". In the Scherzo part, the piano is unexpectedly and very effectively incorporated for the rest of the symphony’s running-time and pushes the listener into an atmosphere of confusion. It is surrounded by a gentle flute motif reminiscent of Russian folklore. The slow part immerses us in a state of reflection. The intertwining of mourning marches and sensitive melodies that prevail later, creates a collision of tragedy. It’s hard to believe that such deep music was created by a 19-year-old. Not surprisingly, the finale explodes with the greatest drama. As the music progresses, the characteristic motives of the previous sections are heard. There is another burst of wild energy in the Coda, and, at last, a positive final thesis.

It would seem that the music of the symphony is somewhat crowded: jazz, poetic lyrics, marches, waltzes, sarcasm, real tragedy, but everything is dramatically very purposeful and tasteful.

Symphony no. 4 (in C minor, op. 43, 1936, premiere in Moscow on 30 December 1961). When we evaluate this symphony today, we must not forget that D. Shostakovich played a frightening game with the authorities for most of his life, and powerful, complex music poured out of all his anxiety. For the first time, his symphony, though only in three parts, lasts more than an hour. It has no equal in D. Shostakovich's work in its concept of ambition and musical imagery. Even the author made no secret of the fact that it was born after torturous trials and doubts, directly influenced by Gustav Mahler’s Third and Seventh Symphonies. It was a new twist of creativity: a monumental form, an expressive musical language, unexpectedly sharp contrasts, a mixture of "low" and "high" genres, and the closely intertwined lyrics and grotesque, which echoed with unprecedented power.

The premiere was scheduled to be performed in the same year by the Leningrad Philharmonic Orchestra, conducted by the famous conductor Fritz Shtidri. However, the composer withdrew the symphony, affected by the sharp criticism of his opera Katerina Izmailova and the negative feedback from the authorities about the new symphony. He blamed it on the desire to further improve the final section. Thus, the premiere took place only 25 years later in Moscow, under the baton of Kirill Kondrashin.

The first part is a conglomerate of intricately woven contrasting themes and fairly independent episodes. The musical process is reminiscent of a huge improvisation, and at the same time a boundless tangled counterpoint with impressive climaxes. The most important is the episode of extremely intense development, the centre of which is a raging fugue reminiscent of a natural vortex. The first such force in Russian music. In the second part, a respite is absolutely necessary. Melodies unstoppably twist in a leisurely tempo. Their intonations are related to some themes from the first part, but they take on a new meaning: grotesque, anxiety. The final part of enormous duration is based on a majestic Mahlerian mourning march. Within its framework, episodes of sharply contrasting genres alternate. When the mourning march returns, it rises to the general climax and suddenly "breaks down". The Coda remains, like a silent echo of past events: what was it?